A renovation of an existing school in Brooklyn, working with a Charter School group passionate about their students’ learning environment, to fulfill their goals under exacting circumstances. 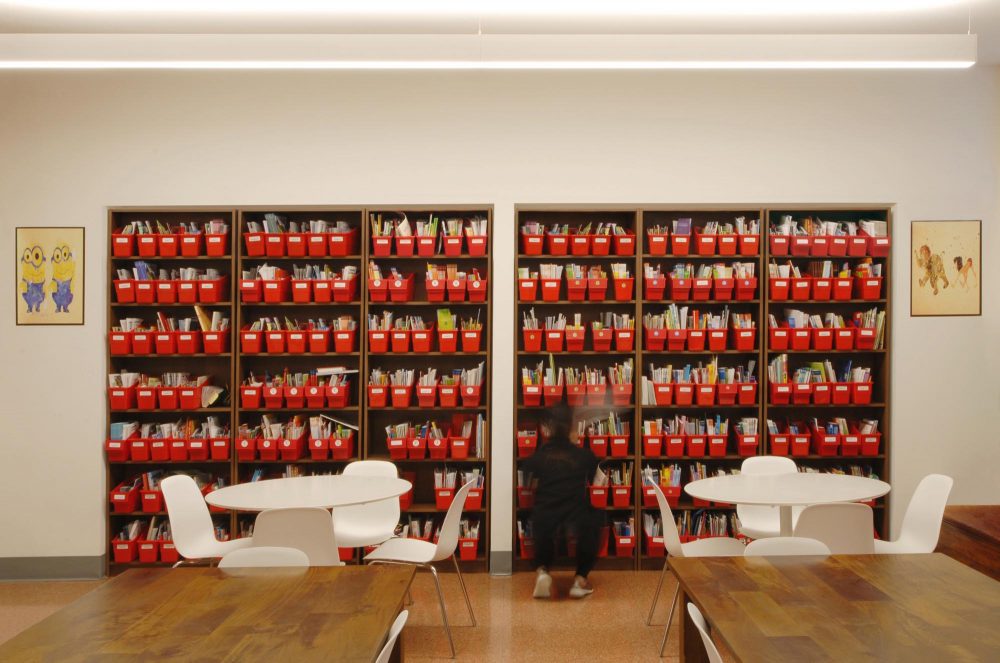 “Ascend schools are not co-located with Department of Education schools. All our schools are housed in inviting, custom-built or newly renovated buildings where every design detail is chosen to communicate our high aspirations for teaching and learning at Ascend, and where school leadership teams can focus entirely on instruction and forging the school’s distinctive culture rather than securing and managing building arrangements. Our school buildings engender a sense of pride and purpose in their communities.”      -from Ascend Public Charter Schools website 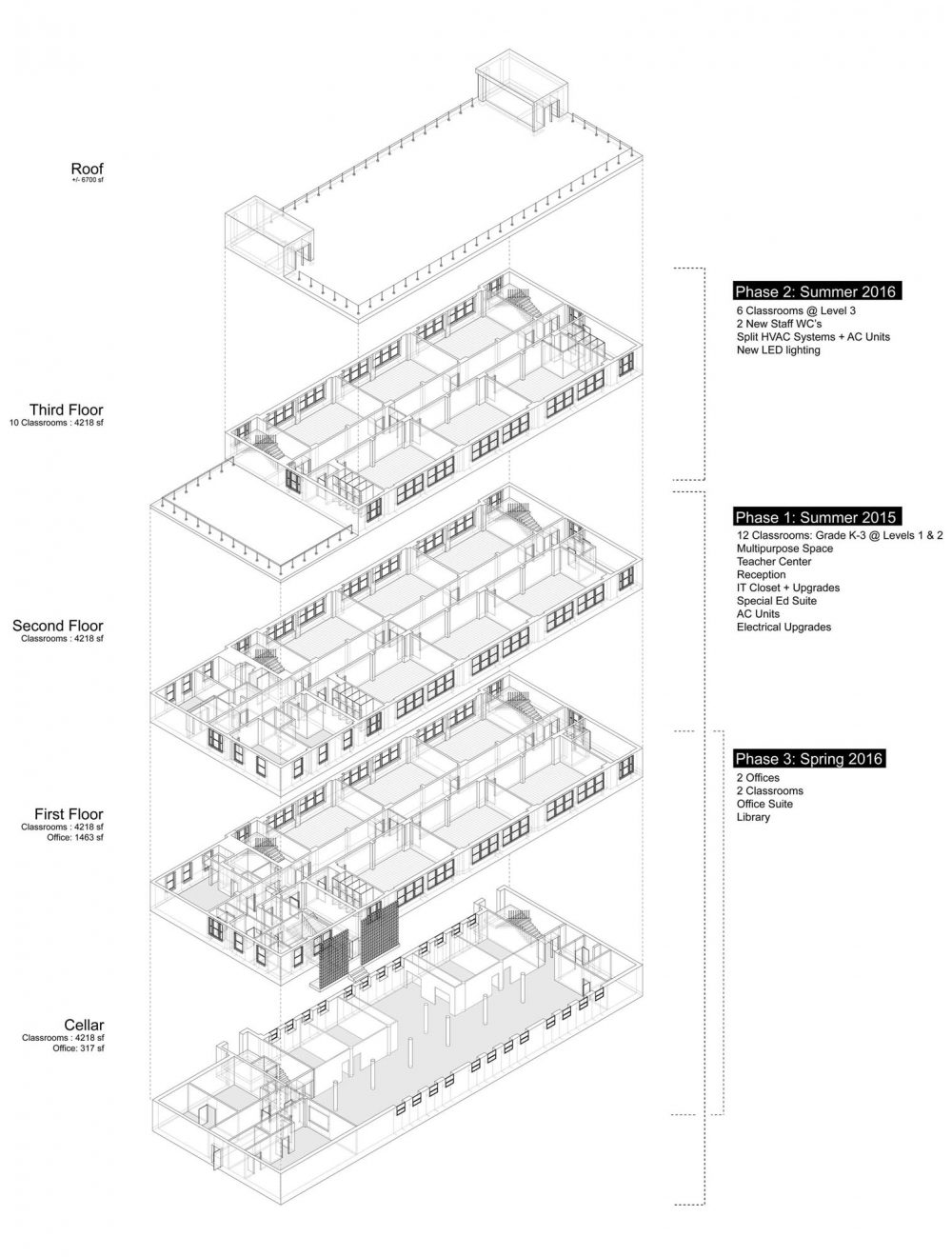 Ascend Public Charter Schools was founded in 2007 and their network to date comprises nine schools. They provide a liberal arts, college-preparatory education to students in educationally under-served communities in Brooklyn – New York City’s most populous borough. Their mission is to place students firmly on the path to success in college and beyond, offering them an opportunity to transform their lives and the lives of their communities.

As part of their teaching process Ascend place great emphasis on the quality of their facilities to show that their students’ education is important and that their students have value. Ascend chooses not to co-locate their schools with public schools (as many other Charter schools do in New York City). Like all Charter schools, Ascend schools’ budgets come from the state and are calculated based on the number of students in attendance. Ascend’s choice not to co-locate their schools is grounded in the ambition to better serve the communities they operate in and have become a part of.

Ascend has a strong desire to build facilities of the highest quality, while at the same time, guaranteeing that money is not wasted on inefficient features that would require costly, ongoing maintenance. In this way, they can devote a larger portion of their budget to teaching costs to better serve students.

Prior to our involvement in this project, Ascend had worked consistently with another firm of architects on their previous seven projects.

An axonometric drawing of a typical classroom

Building a Relationship with a Client

We were selected by Ascend to work with them on the renovation of St. Jerome’s school, located at 465 East 29th St. in Brooklyn. A former Brooklyn Diocese Catholic school, the building was built in 1962 and remained operational until 2014. Over the years, there had been insufficient money spent on maintenance and renovations since the original construction, and the building systems remained largely unaltered from their initial states. Ascend wanted to turn the building into a Lower School to be known as Central Brooklyn Ascend Charter School (CBACS).

We prepared an Existing Building Report and Concept Design study so that we could verify that Ascend’s program requirements would fit within the building. A licensed engineer also undertook a review of the building’s mechanical, electrical and plumbing (MEP) systems as part of the Existing Building Report. With these reports and diagrams, we worked with a contractor and Ascend to put together a Concept Level cost estimate.

Initially, a very basic and straight forward program was provided by Ascend. The best introduction to their requirements came from undertaking detailed walk-throughs of their many existing schools alongside senior personnel. As Ascend at that point did not have a written document to outline their building standards, these tours proved very useful. They helped us to understand how Ascend operated their schools, what worked, and most importantly, what didn’t. It was a great opportunity to talk with senior staff, find out what mattered to them and how we could help them enact their vision for education.

Through talking with Ascend’s team, we discovered strong differences in opinion between the two different divisions; Real Estate & Construction, and Facilities, regarding design decisions that had been made in previous schools. As both divisions have specific roles within the organization, they naturally approached the issue from different perspectives. For Facilities, their main focus was on the maintenance of the buildings, and ensuring features and fixtures were long lasting, and easily maintained and repaired. Meanwhile Real Estate & Construction emphasized designs that made a good impression on prospective parents and members of the community.

Since both approaches were important, we made sure that along with Real Estate & Construction, the Facilities team were also invited to all our major design presentations. This way, they were aware of the evolution of the design and were able to give input into key decisions including finishes. We also made sure that the MEP team made presentations to the full client team so that the engineering needs for the building were given the same level of importance as aesthetic decisions and weren’t overlooked. Our main format for these meetings was a page-turner at which the contractor along with the noted client representatives were present and could ask questions of the design team. Recommendations from participants at the meetings were included in the set in an ongoing manner so that everyone clearly bought into the design and system selection approach. 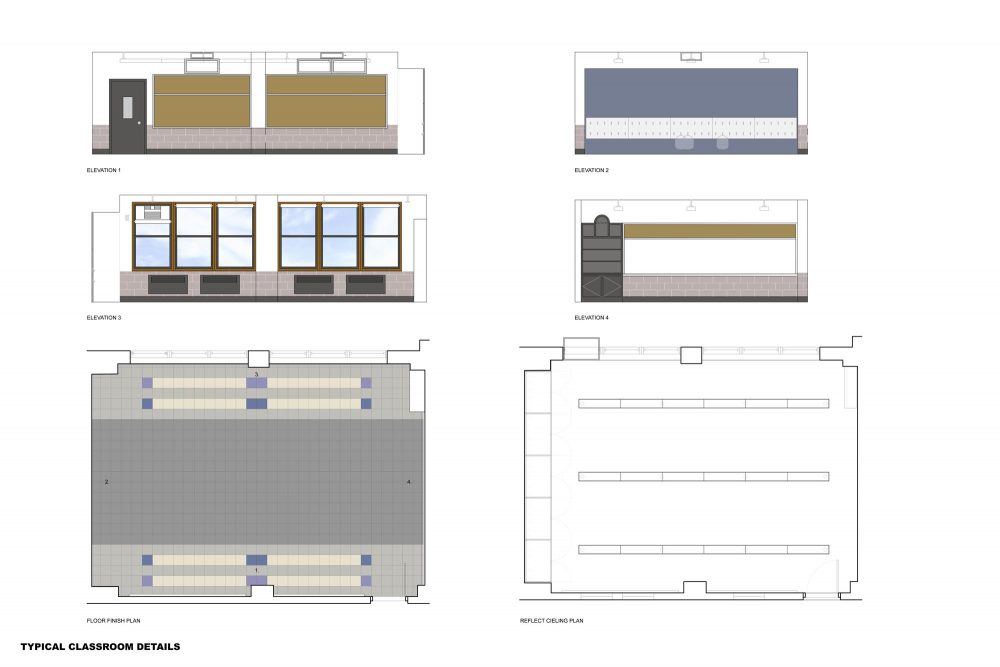 By working in this manner there was a greater understanding of all issues, which were then negotiated so that everyone was comfortable with the final decisions. We were able to co-ordinate issues such as paint finishes, toilet partitions, wall protection and janitor closets amongst other things that had previously led to post-occupancy issues (and so added costs). Similarly MEP requirements such as upgrades to the incoming electrical supply, new through-window AC units and a new gas boiler were installed and coordinated with the Facilities team’s recommendations for what worked for them.

Fortunately, as a result of our approach and the strong relationship we built with Ascend, particularly the Facilities team members, Ascend hired us for additional projects to address problems in some of their existing buildings. Alongside these projects, we developed a standard Finish Schedule and cut sheets in order to provide Ascend with a document to summarize the lessons learned from previous school projects. These efforts are a testament to the benefits of a strong positive relationship between client and architect.

From our test fits as part of the Concept Design study, we knew that we had a sufficient number of teaching spaces, offices, and student bathrooms, but that there was a shortage of staff bathrooms. Ascend’s intensive teaching program doesn’t allow the staff much time between classes, and having to walk between floors to use the bathroom would be too time consuming. Adding a staff bathroom at Levels 2 and 3 (areas with eight classrooms plus various other spaces) would mean teachers on those levels would be able to stay on their floors, thus the teaching program was assisted by the building’s layout.

As construction was limited to two months in the summer when children are not in school, the work was divided into two separate phases (Summer 2015 and Summer 2016). The first phase was predominantly finishes, new doors, and miscellaneous hardware to bring the building up to Ascend’s standards. The second phase involved extensive upgrades of the electrical and lighting systems, major revisions to the bathrooms and plumbing systems, and new air-conditioning in all classrooms, offices and the Multipurpose room (MPR) space. The scheduling throughout these two phases involved careful coordination with the contractor and the school administrators to ensure that deadlines were met and there were no delays to the commencement of the school year. 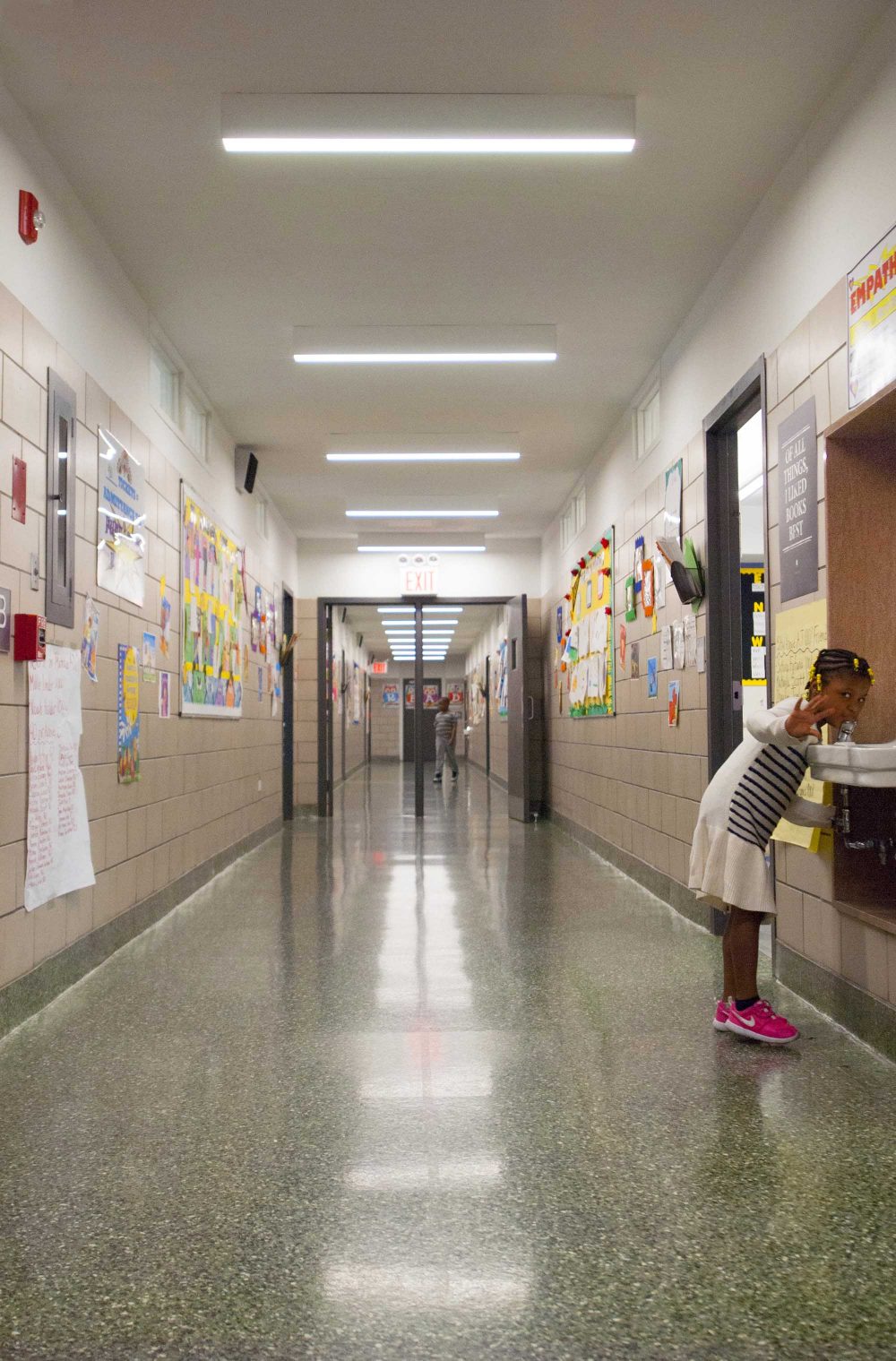 After the initial year of occupancy, as the School Director developed their specific method of operations, it became clear that further changes would be necessary for the school to operate as desired by the school team. The Director of Operations Administration suite was proving too small and inflexible for the functions the staff held there (just as it wasn’t very welcoming or private for visiting parents). They also found they didn’t have enough intensive teaching spaces for small groups, and that, after further work was done to enhance the exterior play-space, the program requirements on the MPR space were greatly reduced. Originally, our design had proposed additional classrooms within a portion of the MPR space on the basement level. These features had been cut to reduce costs and complexity in the initial project.

As part of the post-occupancy reassessment we were able to resurrect this basic design, but provide smaller teaching spaces along with much needed storage spaces. Furthermore, by carefully considering the school’s needs, we were also able to design a Library space with over 224 linear feet of built-in shelving which should provide space for between 1,800 and 3,600 books. The Library is a welcome moment of tactility within a functional and fairly austere building, and marks the start of Ascend’s drive to introduce significantly more physical books into their schools and encourage students to develop a love of reading. The Library is the area above any other in the project where the architecture and educational goals are perfectly aligned. It was satisfying that by taking an initial simple approach to the design, scope was provided for Ascend and the school to observe over time how things performed before deciding where additional work would be required.