Forests and Geography of North America

North America used to have a lot of forest. Prior to the arrival of European settlers, Native Americans such as the Patuxet tribe of the Wampanoag Nation in present-day Massachusetts had been sustainably shaping forests for thousands of years. The Patuxet strategically burned and felled areas of forest, using excess wood for the construction of dwellings. Crops were often planted in the ashes of burned areas, which were rich in calcium, potassium, and phosphorus, essential nutrients for food production that were lacking in the region’s soils.1

This was in contrast to the haphazard clearing by the colonists. Between 1620 and 1920, European colonists cleared an estimated 286 million acres of forest.2 (fig.1)3 Since then, the amount of forest actually increased slightly, from 721 million acres in 1920 to more than 766 million in 2012.4 Efforts to restore native forests and habitats continue today (fig.2)5.

Today around 15.5% of the world’s forests are located in North America,6 where Canada has the third largest forest area in the world followed by the United States with the fourth largest. Across the continent, there are twelve different types of forest that range from broadleaf deciduous forests in the East to the temperate rainforests of the Northwest. While much of the old-growth forests are gone, there have been significant replanting efforts, though with a reduced number of species in many areas, which has reduced overall biodiversity. Forests with higher levels of biodiversity are more resilient to withstand extreme weather events, like floods and prolonged droughts, fires, and invasive insects and pathogens.7

fig.1 Virgin forest in the U.S.

Given the relative abundance of forest within its territory, the US has a competitive advantage within the global market. And commercial interests and proper management need not be opposed. In fact, sustaining healthy forests can allow for targeted industry involvement, promoting circular economies with renewable materials like wood.

Today this issue is particularly salient given the need to mitigate the worst effects of climate change. Because trees sequester carbon, reforestation can be an essential pillar in the US response to reduce its emissions. Beyond absorbing carbon, forests improve air and water quality and habitat for wildlife. To be sure, reforestation within North America must function to restore equilibrium to the ecosystem, integrating commercial species within patches of native forest that promote biodiversity while simultaneously benefiting the economy. 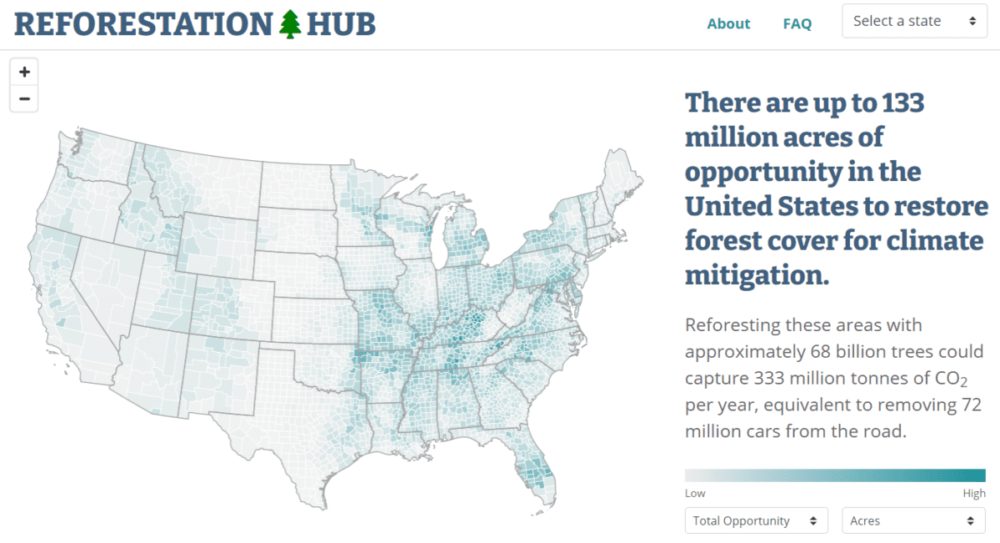